Fixer for a BBC Documentary in Vinci, Tuscany 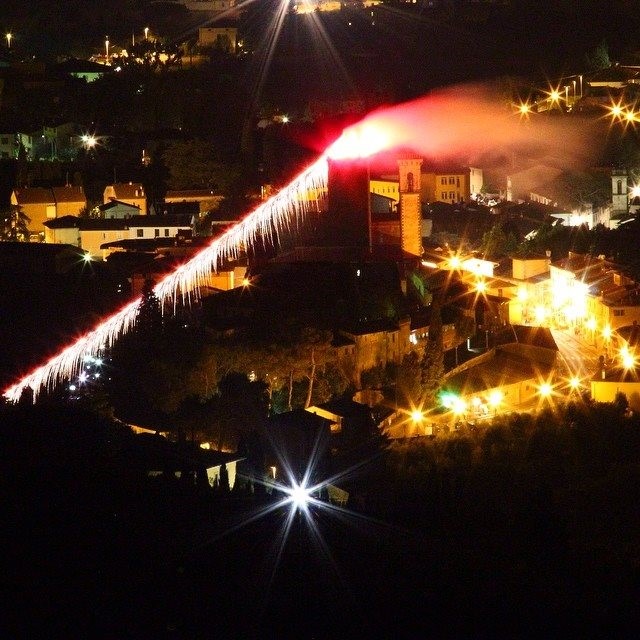 The Scottish production company STV came to Tuscany to film the festival of the Flight of Cecco at Vinci, as part of a documentary on the history of fireworks. The programme was presented by historian/presenter Lucy Whorsley,
STV contacted us to help them with the logistics and access for filming the event. Each year, on the last Wednesday of July, the residents of Vinci celebrate the story of Captain Cecco di Santi, a soldier in the Vinci army, who for the love of a noblewoman of an enemy town, betrayed his city thus deserving a horrible death sentence: to be thrown from the tower of Castello dei Conti Guidi. If the Captain was able to survive the ‘flight’ he would be able to save his life. As it turned out, maybe thanks to a last miraculous glass of the local wine, Cecco was able to fly as far as the opposite hill, saving himself miraculously.
So, to this day, the local townspeople celebrate the story of Cecco with great pomp, a big parade all in medieval dress, and the ‘flight’ from the tower (with a bit of help from some wires) and a spectacular firework display to cap it off.
The fireworks are supplied and managed by the same company every year, Nanna, a family business that has been in operation for almost 100 years.

As the fixer for this history documentary, Fabio contacted the organizers of the event, sorted out access for the television crew, and helped establish how and where the filming would take place.
Lucy Whorsley gamely joined in the celebrations, dressed as one of the nobility, and also met and interviewed the owner of the fireworks company to get some of the background history of fireworks in Italy.
The programme will air on BBC4 in 2018.