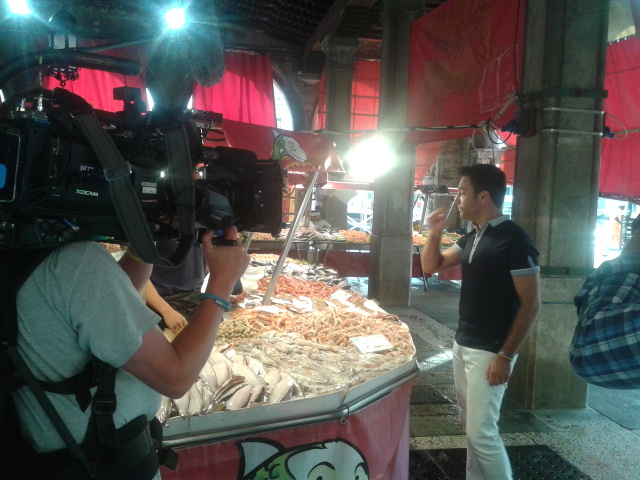 After the success of the first season of GINO’S ITALIAN ESCAPE, Gino D’Acampo returned to Italy to discover the north and central regions of Veneto, Emilia Romagna, Tuscany, and Liguria, and Fabio Di Segni, the Location  Producer for the series, handled the research and development of the stories, organized film permits, crew transportation and all the logistics of the TV shoots.

The series was a visual feast, with a ‘pescaturismo’ in Camogli, Liguria where Gino could fish with the help of the fisherman and prepare the fish to eat right there on the boat. In Recco, in Liguria he made the regional focaccia a special type of flat bread unique to the area. And, of course, you can’t go to Liguria without visiting the famous basil fields and seeing pesto made in the traditional way.

As the Location Producer and Fixer, Fabio organized shoots for Gino in Siena, Prato, Florence, Parma, Modena, Bologna, Verona and Venice, visiting characteristic places and interesting people along the way. Gino sampled the delicious peaches of Prato, and made the traditional Sienese panforte with a spectacular view over the city. In Venice, Gino rode on a gondola with a Venetian countess to visit typical Venetian places to eat cicchetti, which he then prepared himself on a balcony overlooking the Grand Canal. In Tuscany, he spent an afternoon with monks who make a very special chianti wine in their monastery. In Modena, Gino tried the famous mortadella, and in Bologna he couldn’t leave without making and eating tortellini. And in Verona, he visited the rice fields and learnt the traditional way to make their very own risotto.